If you knew you could be someone like Chuck Norris or Jason Bourne, would you try? There is a new Android app available that allows the regular Joe or Jane to deftly wield the power of money against the dark minions of SOPA. Get a closer look at this Android app called “Boycott SOPA” here in this quick article.

The powerhouse that is becoming what is known as the mobile revolution now has a potent tool for the public. For those who are familiar with the political action called “SOPA” that is brewing, you are probably wondering, “What can I do about SOPA?”. Now, two college level programmers have done it for you. It is called “Boycott SOPA” and one of the best things about it is that it is a free download.

The idea for SOPA came from the companies of Hollywood, California. All they needed was for someone with enough power to take down so-called sites that offend copyright laws. They found a willing sponsor for their plan to take down web sites in the Congress of the United States. The “Boycott SOPA” Android app takes care of this abuse of power in the form of a simple program. It hits the companies that support SOPA right where it hurts the worst, in their bank accounts. 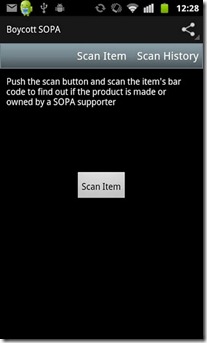 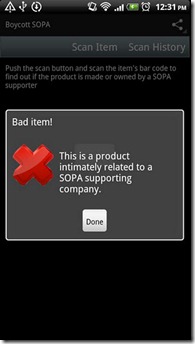 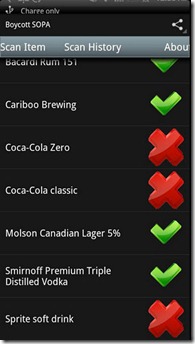 The two programmers who are making the “Boycott SOPA” program are keeping their names out of the spotlight. No names are found on the regular pages of their web site ( nomoresopa dot com ) and they are guarding it in the Whois information from their domain registrar. Nevertheless, what they have designed an easy to use tool that simply scans barcodes and tells the scanner if the company selling the product is supporting SOPA or not. All they ask for is donations to help them buy beer and pizza. They say it will help them to keep the “Boycott SOPA” program updated.

How To Get Started With Your Own Smartphone

To get started with the “Boycott SOPA” Android app a free scanner app called “ZXing Barcode Scanner” will need to be downloaded first. After that, the “Boycott SOPA” app can be downloaded. That is it for the most part. The app is used to scan products which then tells the user that the product is or is not made by a company that supports SOPA. The app is in the Android market as you read this and has a favorable rating from those who have used it.

Gadgets That Will Keep You Organized
How Does a Mobile Phone Network Work?
Comment