Comparing the Samsung Galaxy Tab 10.1 to the Apple iPad 2 is unfair from the get-go as is comparing an current tablet to the iPad 2. The iPad was, after all, what introducedthe concept of the tablet to society. Coupled with Apple’s reputation as the gatekeepers to computer perfection, it’s nearly impossible for competitors to produce a tablet that can outdo the iPad 2. Motorola tried with the Xoom, HP tried with the Touchpad, and Samsung originally tried with the Galaxy 7 and 8. Now Samsung is trying again, and is getting there, but there’s still an enormous amount of ground to cover.

The first major appearance difference between the Galaxy and the iPad is the default orientation. iPads are presented with a vertical default orientation whereas the Galaxy is horizontal. Inconsequential, since either can be used in either orientation, but fixing the Galaxy’s camera to the long end of the tablet makes it look more like a flat screen monitor than a tablet. When the comparably priced $499.99 iPad 2 and Galaxy 10.1 models are side-by-side, the Galaxy trumps the iPad with an extra .3 inches of display space. Added to the fact that it’s also .2 millimeters less thick than the iPad 2, the Galaxy 10.1 does a standup job looking just as pretty as the competition. 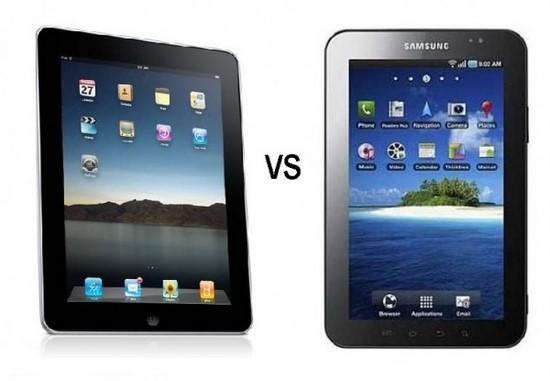 The Android Honeycomb operating system is an astounding achievement of OSS OS design that’s made its way onto most iPad alternatives, but that hardly compares to the highly engineered and ever-improving capabilities of iOS. Both tablets feature 1Ghz Dual Core processors and 16 GB worth of hard drive space, which puts little advantage in the Galaxy’s court when you consider the friendliness of iOS. Simple downloading and using of apps ï¿½ what the Android OS was primarily designed for ï¿½ is what the Samsung Galaxy does best for typical users. But attempt to sync with independent email services, shuffle documents around, and generally treat your tablet like an on-the-go work computer, and the Galaxy starts to choke under the pressure unless the user is savvy enough to work around the flaws in the patchwork of an OS.

Meanwhile the iPad 2 was designed from the beginning to provide normal users with the ability to interact with the Internet in a more hands-on way while still providing them the ability to treat the device like a laptop. It’s the user friendly capabilities of the operating system’s function that consistently makes the iPad the superior machine while competition merely struggles trying to catch up.

Then there’s the nail in the coffin: Apple tech supportis stellar. It’s expected that a newfangled device like a tablet is going to get its fair share of support hotline call-ins at Samsung. Yet their technical support services still leave much to be desired, and when tested some of the support team members weren’t even familiar with device yet. On the flipside, Apple tech support, while only free for a limited time, is rated high the world over.

The Samsung Galaxy 10.1 would be a worthwhile tablet if it didn’t cost as much as the iPad 2 while not offering anything that the iPad doesn’t. Choosing the Galaxy over the iPad would be a simple matter of loyalty or loyal hatred. The general consumer is still probably going to prefer the iPad 2.

Does the Galaxy Tab 10.1 Standup to the iPad 2? was last modified: July 17th, 2018 by Vikram
TagsAndroid iPad 2 Samsung Galaxy Tab