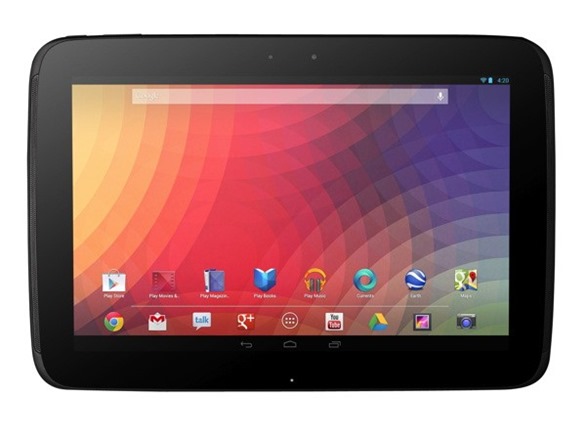 Touted as one of the better Android tablets to have come out in the market, this one comes with the quickest processor seen in any Android tablet till date. The Nexus 10 is the only tablet which can safely provide competition the Apple’s iPad and thus that speaks a lot about the new tablet from Google.

One of the best designed tablets to have hit the market, this tablet weight 1.33 pounds and is the lightest available tablets in the market. With the round, smooth corners this tablet will never sink in your palms and thus will provide you with hurt free grip. With the rubber cover on the back, the grip gets much better and this also works as a good cushion in case you fall the tablet.

The corners and the edges of the tablet stay scratch free owing to the rubber protection and thus sharing a single tablet with the whole family (in case the need arises) will not make you go scared with the fear of someone giving it a scratch or dent by rough use.

The speakers are front facing and thus increase the width of the bezels (which again works in favor of the good grip). The left side of the tablet is where most of the ports are available. The head phone jack, the data port, the micro USB charging port, the power button, the sleep button and also the volume button all are placed on the left side while on the right side you have the Micro HDMI port sitting secluded.

The tablet sports a 5 MP camera on the rear which has a LED flash along with a microphone. This device also has a 1.9 mega pixel camera in the front. The tablet might not fall into the category of being a sexy tablet but still it has the looks and features to give other tablets a run for their money.

Comes with the 1.7 GHZ dual core Exynos 5250 CP, this tablet is true competition to the Apple’s A5 and the A6 processor yielding tablets. It comes with a MIMO Wi-Fi, blue tooth 4.0, NFC (near field communication), digital compass and an accelerometer.

This tablet sports a new feature which is quite similar to the SWYPE feature which has been used in some devices off late. This feature can almost accurately figure out the gestures you make by your finger and thus types almost exactly what you want to type. The top right corner is where the tablet settings are hidden and thus it again makes it easier for a user to change or work on them without trouble.

It has got a dual core processor. It includes lots of RAM inside it. But again lacks in miscroSD storage for the expansion of storage.

Definitely a premier tablet to have been built by Google till date, we would maintain this has what it takes to compete with Apple. Add to that the lower price which this beast comes with, makes one tilt a bit more towards the Nexus 10. Just add some more apps and the Nexus 10 will become the force to be.