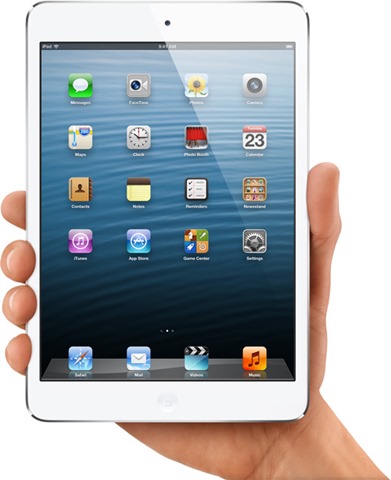 There have been rumors since quite some time that Apple plans to come out with an iPad mini for its clientele and finally they came out with one, which left us pretty happy what we saw. Also, people needed a tablet which will be more affordable than its big brother, the 10 inch iPad, while something that one can hold in one hand. That is where we had the iPad mini at some 7.9 inches at a cost which is definitely targeted at budgeted customers.

The iPad mini comes with an anodized back with aluminum and that is what gives it that new look. This is no iPad which one can call a smaller version of the iPad 4 or for that matter the previous versions. With curvy edges, we can actually say that curves are back. These curvy edges make it much easier to hold the iPad, and provides with tighter grip. At 0.68 pounds or roughly 308 gm, you would have no issues in carrying it around. The IPS LCD provides 1024 x 768 pixels which is again quite in line with what Apple provides.

The 7.9 inch iPad mini LCD screen packs a pixel density at 163 ppi, which is quite impressive but then one can expect such features from Apple. Though when one compares this to the iPhone 5 the clarity is not is not as good. Even at different viewing angles the images and the texts are pretty clear and the brightness and colour reproduction does not disappoint.

The buttons have the same familiar lay out as found in previous iPad. The right side upper portion is where one would find the volume rocker and the lock switch. The opposite side has the 3.5 mm head phone jack. The bottom of the device has the lightning connector. This iPad doesn’t have the customary head phones in the package, which might get some boos from people.

The camera, at 5 mega pixel sits pretty at the rear and is an iSight camera. The Face Time HD 1.2 mega pixel camera is found in the front on top of the LCD.

Armed with 1GHz dual core CPU and 512 MB RAM, the iPad mini has similar innards as the iPad 2. The apps take a little longer to load and the taps & swipes might be a wee bit slower, but the battery life is pretty impressive.

At an average battery life of 12 hours + this is undoubtedly the only tablet with such an impressive battery life.

The IPad Mini is very small and hence can be held only with one hand. It can have admittance to 4G mobile broadband in several markets over the whole country. The price of IPad Mini is a bit too high. Many weaknesses are associated with it as it does not support widgets and other home screen things.

One can proudly look forward to own this device as this is no smaller version of the bigger 10 inch iPad. It can easily be called one of the best tablets that is available in the market today when one compares it’s light weight body, the thinness, the perfectly constructed body and an amazing battery life. If you have not bought a tablet yet, this is the time to get your hands on one.