Home » Mobile » Reasons Why Your Devices Heat Up 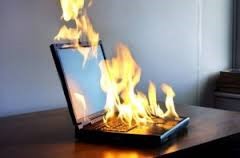 Smart phones and tablets are now considered universal (being used all over the world) to access important information on the go. Although it’s a good thing when you become dependent on a single gadget or two, you have to make sure that it works fine and take good care of it.

This is why when your smart phone or tablet gets hot, you start asking yourself questions: ‘Why is it heating up?’; ‘Should I buy a different brand?’; ‘Can this heat potentially cause the device to malfunction?’

There are several reasons why your device may be heat up. Exposure to dust may cause the inside of the device to overheat, while the temperature in some states like Florida may only exasperate the issue. A great way to keep your infrequently used electronics cool in hot cities like Miami or Orlando when not using them is to opt for air conditioned storage and other available options.

There are several other causes of heating. Here are some of them in detail:

The most logical explanation of the heat up of your smart phone or tablet is its small size. Other gadgets like laptops, printers and television also suffer from heating issues, but they have a large space for ventilation, which means the hardware inside is able to cool down.

As for smart phones, you use them in your hands, which mean apart from low ventilation space, they also receive heat from the palms, while tablets are mostly used on surfaces that are flat. This leaves low or no breathing space for both of these devices.

Ever wondered why your device heats up more when you’re playing games? This is because the mother board takes a lot of load compared to when you send someone a text message or make a phone call. Gaming requires inputs of electronic processes at an extremely high rate.

A lot of resources are also used when playing games such as the processing speed, Graphical Unit Input and other complex functions, which is the reason why the device heats up during this activity.

Most smart phone and tablet manufacturers don’t make batteries themselves, but buy them from third parties. It is rare, however to see any brand saying the consumer needs to get the battery replaced, and they aren’t aware the life cycle is different and averages from 350 to 500 cycles of charging.  If your device’s battery drains after every day or two, you should be replace the battery every year.

Battery drainage is also linked to the heat up of the device, as more drainage can cause the battery to become weak and the device to heat up quickly due to faster ion movement. You should also recharge at partial intervals rather than waiting for the device to be dead before recharging it.

One of the most resource consuming activities that you can engage in from smart phones and tablets is online browsing and streaming. The latest devices now include 4G connectivity, which means the temptation to stream online, is greater than ever.

However, there are a lot of resources used to make online streaming possible. Apart from the video resources, the device also has to intake large transfer of data from network centers. You can expect a smart phone to heat up when as there’s a lot going on inside when you stream Netflix or NCAA championship, or even when you’re on YouTube.

These are the reasons why your smart phone or tablet heat up, and there’s hope manufacturers will look more into air conditioning and cooling technology to come up with better solutions and enhance the life of these devices.

Reasons Why Your Devices Heat Up was last modified: July 17th, 2018 by Vikram

Samsung Galaxy Note 3: All that we know
Features to be Main Attraction of Android 5.0 Key Lime Pie
Comment