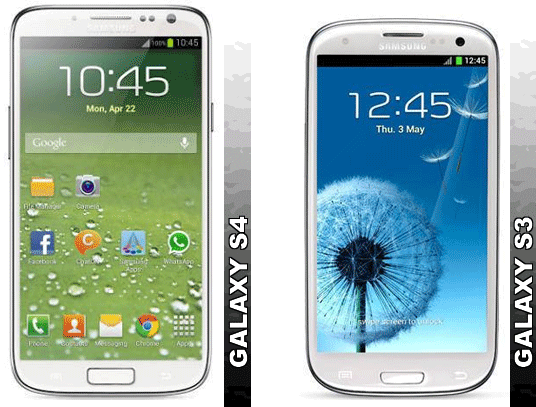 Samsung Galaxy S4 is anticipated to be the most highly rated Smartphone of 2013. It has been applauded by critics and the public alike. Samsung Galaxy S4 is riding a lot of expectations on its back. Since the launch of Samsung Galaxy S4, the experts have started making comparisons with Samsung Galaxy S3. Both the versions have deep differences from each other in terms of technical specs, the price and the features riding on them.

Some of the comparisons will make it easier for us to choose the preference of one device over the other:

The quad core Exynos 4 Processor of Samsung Galaxy S3 is clocked at 1.4 GHz, while on the other hand, Galaxy S4 possesses Exynos 5 Octa processor which is stronger than the one present in its predecessor. Galaxy S4 has rocked the smartphone market with the introduction of first ever 8-core chip processor.

The memory of Galaxy S4 is 2 times better than Galaxy S3 as it measures at 2 GB of RAM while Galaxy S3 measures 1 GB of RAM. Thus, in terms of Processor and memory, Galaxy S4 possesses a competitive edge over Galaxy S3.

When Galaxy S3 was launched in 2012, its camera had become an outrage in the smartphone industry as it possessed a great snapping capacity with 8 megapixel resolution. Although, the camera has been upgraded in Samsung Galaxy S4 and it is available at the resolution of 13 megapixels. Some differences are noticed in the quality of imaging in both the phones. Thus, comparing both the phones on this parameter, Galaxy S4 wins the race.

When we talk about the price of both the devices, a huge difference is spotted between both the devices. Galaxy S4 had been released in May 2012 with the price level of $650 USD, which was considered to be high in that time. On the other hand, the expected price for Samsung Galaxy S4 is $780 USD, which is a great match to its incredible features.

With its power packed processor and great battery life along with an upgraded camera, Galaxy S4 definitely wins the race based on all these grounds. The features packed in Galaxy S4 are incredible and there are so many reasons to support the fact that it is anticipated to be the best selling smartphone of the year.