Samsung has announced that the first Smartwatch is about to be launched – their much-lauded Galaxy Gear will make an appearance at a trade show in Germany this September. However, before you get too excited, this watch is still technically at the ‘concept’ stage, and Samsung has said it is unlikely to go on general sale immediately after the show. It also doesn’t contain the flexible screen technology Samsung said all their future devices would be made with, so what’s happened to the manufacturer’s dreams of launching flexible technology on the world this year?

Samsung is proud of its Smartwatch, which, they claim, will “…lead a new trend in smart mobile communications.” They’re also confident that it will add ‘meaningful momentum to the mobile industry’, although as yet nobody’s quite sure what that actually means. But the biggest back-pedal as far as the industry is concerned is the noticeable lack of flexible technology incorporated into the design of the screen, something that Samsung said the Galaxy Gear would definitely have.

One of the biggest stumbling blocks that’s keeping this technology in the ‘concept’ stage rather than pushing it into full mass production is the difficulty in reproducing the same palette of colours that you get with the usual LCD technology. Innovation companies such as Plastic Logic are making considerable inroads into this area, but even they believe there is a way to go before plastic electronics have the same range of hues and tones as their traditional counterparts. 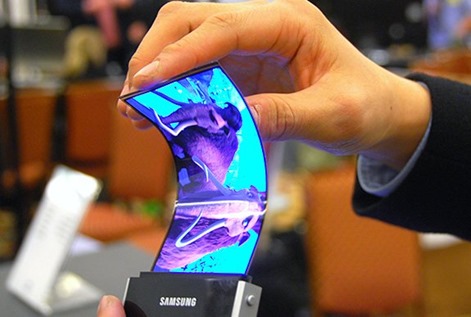 The current flexible displays have a palette of around 4000 colours, and are produced by laminating an RGBW filter on top of a monochrome display. Even so, these colours are still a little muted when compared to a standard LCD. But progress is being made, and Plastic Logic’s CEO Indro Mukerjee is confident that they will make a breakthrough in colour technology for flexible electronics in the near future. It could also have a wealth of potential applications, including a smartwatch that’s thinner and more lightweight than the somewhat clunky designs being showcased at the moment, as well as being far more robust.

“Plastic Logic’s development of a colour flexible plastic display is particularly significant, since the same process could enable unbreakable, flexible display solutions with other media such as LCD and OLED,” explained Indro Mukerjee recently.

Innovation is one thing. Application is quite another. Currently, the innovation is outstripping the applications, although the potential for flexible plastic electronics is huge. Perhaps the mistake that Samsung has made at this juncture is to issue press releases and launches demonstrating concepts, but without the actual commercial venture to bring these ideas to market. Fundamentally, Samsung has jumped the gun a little. What others in the industry such as Plastic Logic have done is to examine not only the potential but also the practical applications to which plastic electronics could be applied. They’re also not as constrained by commercial considerations as perhaps Samsung is.

So rather than being led by manufacturers, over the next couple of years we may see the development of flexible electronics being led instead by R&D companies, who have a little bit more freedom to explore all the possible permutations that this 21st Century technology offers.